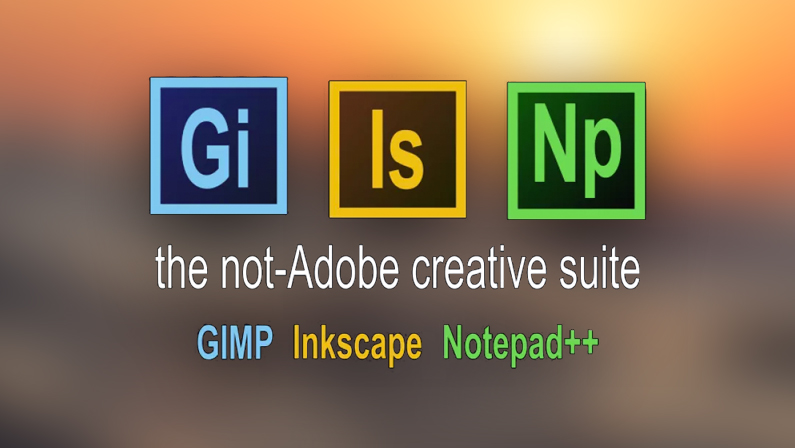 If you spend a lot of time producing content on the web, there’s a strong chance the Adobe Creative Suite comprises many, if not most of, the tools in your toolkit. If you’re on a budget though, or want to offer your students free software alternatives, check out my “Not-Adobe Creative Suite” below.

On my home computer, where I don’t have access to my educator’s license for the Adobe Creative Suite, I rely on two Open Source alternatives for my graphic design needs. I’ve found that they are generally more than up to the challenge for whatever task I’m seeking to complete.

Instead of Photoshop, I use GIMP. GIMP is an acronym for GNU Image Manipulation Program. Consider it the free version of Photoshop that you wish you knew about years ago. It does come with its own quirks and differences that can make it a little challenging to learn, but you can’t beat the price – free. If you’re a Photoshop power user, the link below will make your transition to GIMP a little more comfortable by implementing many of the same keyboard shortcuts that you’re used to in Photoshop.

The above modification is as far as I go in making GIMP more like Photoshop, but if you wanted to, you could add plugins and themes to make GIMP look very similar to Photoshop by following the tutorials at either of the two links below. My personal feeling is that the hassle isn’t worth the payoff though.

Instead of Illustrator, I use Inkscape. Inkscape is an open source vector graphics program that I actually learned before Illustrator. There are definitely some differences between the two programs, but I’ve actually found that I like the way that Inkscape handles certain aspects of design, like object and stroke sizing, better than Illustrator.

Inkscape is a robust program that features advanced tools like image trace (Inkscape call this “Trace Bitmap…”). Like Illustrator, it relies on paths, anchors, and handles to create objects, and many of the same “Pathfinder” tools are present – though with different names. If you’re new to vector graphics, Inkscape is a great place to get started.

Instead of Dreamweaver, I use Notepad++. Admittedly, I only use Dreamweaver in its code editing mode, so if you’re looking for a robust WYSIWYG, this probably isn’t a suitable alternative for you. Everyone should learn to code though… so take a few lessons at codecademy and say goodbye to Dreamweaver.

For whatever reason, I really like Adobe’s uniform creative suite icons. For this reason, I put together an Adobe inspired set of icons for the software above. Download the icon pack here: icons.zip.

You have Successfully Subscribed!